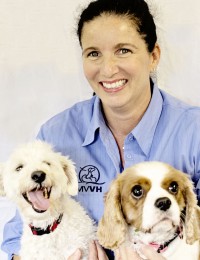 Dr Anne was born and raised on the Northern Beaches but having a pilot for a dad meant she lived all over the world during her early years including UK, Greece & South Africa.

After travelling through South America, USA, Europe and UK for over 12months Anne came home to start her Veterinary Degree, graduating with honours from University of Sydney in 1997. Her first job took her to Singapore where she worked for both a local Veterinarian and the quarantine station looking after all the small animals coming into the country.

Returning to Australia in 1999, Anne worked in many of the clinics along the Northern Beaches before taking up a more permanent position at Mona Vale Vets where she has remained ever since. Although in 2008 she & her family took off after buying a 4WD with a camper trailer and travelled around Australia for 6 months.

In 2010/11 she went back to the books and obtained her Diploma in Practice Management (Veterinary), just in time to become a partner with Alison & Jenny in February 2012.

Dr Anne has 2 beautiful almost grown up children; Toby, exploring the world after finishing high school last year and Chloe, finishing her last year at Pittwater High School . In her spare time you will find Dr Anne hanging out with her 2 kids, doing whatever sport she can involve herself in and hopefully ski-ing in the winter.