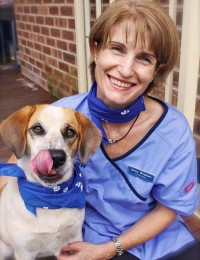 Dr Jenny joined MVVH in 2007 following an interstate move from Victoria and along with Dr’s Anne and Alison, took over ownership of Mona Vale Veterinary Hospital in 2012.

Jenny has worked in a variety of veterinary practices throughout her career, beginning as a mixed animal (large and small) vet in Bathurst, then working in a variety of clinics in NSW and Victoria before setting up her own practice in Melbourne, which she ran in partnership for many years. The tug of grandparents (and childcare) prompted a move back to Sydney.

Dr Jenny enjoys the challenges of soft tissue and orthopedic surgery and stimulation of problem solving tricky medical issues, particularly endocrine ones (hormones). She is one of our behaviour vets, having pursued further education in this area.

Out of working hours, you will find Jen at the gym or going for a run. She loves entertaining family and friends and is a regular at Narrabeen Baptist Church. Married with 3 humans kids (a daughter studying Teaching at university, and the boys at St Lukes Grammer and Oxford Falls Grammar). Jenny also has a young Labrador called ‘Popcorn’ and 1 kitty kid; Sugar, who was abandoned and hand raised by nurse Viv at MVVH.