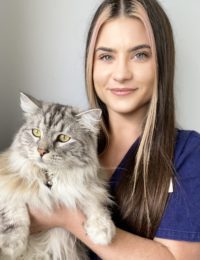 Taylor is one of our nursing teams newer recruits, joining us at the end of June in 2020
Starting out in the veterinary industry as an animal attendant in 2012, she progressed through the ranks to become a senior vet nurse by 2017. During this time she worked in clinics on the upper North Shore. After a few years away from the animal industry, working in the medical and legal sector, Taylor was lured back to her passion of providing care for pets and joined our team last year.
When asked about her favourite parts of vet nursing, she replies that critical care and emergency are key aspects, plus grooming and pathology.
Taylor has had a few animal adventures of the years, including assisting in the nesting, hatching and releasing of sea turtles at the Mon Repos Conservation Park in Queensland; Diving with the fur seal colony in the Montague Island marine park on the NSW South Coast; learning and interacting with wild Australian Humpback dolphins at the Barnacles Dolphin Centre in Queensland
Taylor’s fur family consists of Flicka the horse, Shilo the cattle dog and Batman the Domestic Shorthair Cat